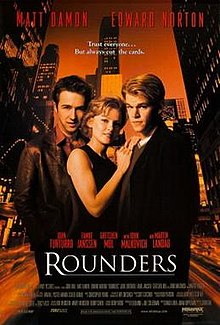 If you have never been in a casino, your only exposure to high stakes gambling may be on the silver screen. In the list below, there are three top casino related films of the 1990s.

The Sting was the second and also the final collaboration between Robert Redford and Paul Newman, although Redford claimed that he wanted to make a third one with Newman before he died. The movie tells the story of two professional conmen trying to swindle a mob boss. The Sting was made in 1973 but it was set in the 1930s. Therefore, it was split into “acts” that used title cards, and designs of the time. Although the movie isn’t set in a casino, it features poker as a main plot device.

The 1995 film Casino starred Robert De Niro as Sam Rothstein, a handicapper that was used by the Italian Mafia to front a selection of new casinos Tangiers. The mob sent in an enforcer, starred by Joe Pesci, but later his name was added to the Black Book and chaos ensued.

The film Casino was based on the life of Frank “Lefty” Rosenthal, a real handicapper, who worked for the Mob and later escaped after an assassination attempt. It received positive reviews while many thought that it was too similar to Goodfellas and its violence was gratuitous.

Rounders is another casino-related movie that starred Matt Damon. In this movie, he is playing cards rather than robbing the casinos in a movie about high-stakes poker. Matt Damon pairs with Edward Norton, playing poker to pay off a large debt. While Rounders didn’t do so well at the box office, it became a cult hit after the poker boom of the 1990s.